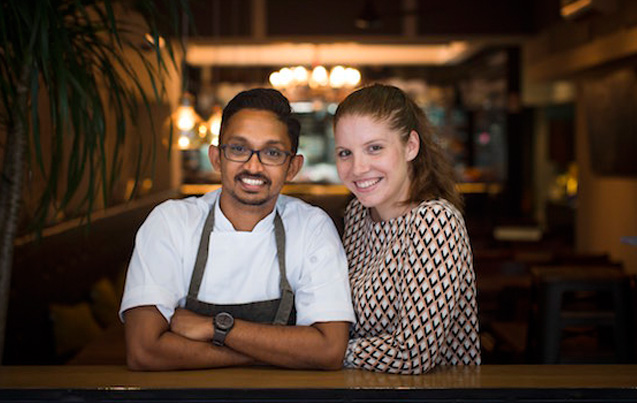 Dilhan C. Fernando recently had a candid chat with Head Chef Rishi Naleendra of Cheek by Jowl, the first Sri Lankan to win a Michelin star and his wife Manuela Toniolo, who manages the restaurant.

Rishi felt the need to give something back to his country of birth; hence a different recipe of sort, Rishi put together this time as he took to his latest culinary expedition. Partnered with Dilmah – a brand with a commitment to human service, Rishi recently embarked on a gastronomic journey with a group of underprivileged children at Empower Culinary and Hospitality School – a commitment which has has begun to infuse innovation and new thinking into the minds of future chefs being nurtured at the Empower Culinary and Hospitality School in Sri Lanka.

The project saw Rishi sharing his expertise with the students of Empower School – Sri Lanka’s only WACS Certified Culinary Institute, which was established by Dilmah Founder Merrill J. Fernando to offer the underprivileged an opportunity to rise above their circumstances through education and training on cuisine and hospitality. The chef will set up the Cheek By Jowl Library which is equipped with some of the best culinary books, two work stations for online research with multimedia facilities for smaller groups, within the Empower Culinary School premises to assist the students.

<p>With an impressive culinary background and with years of experience, Rishi, now in his early 30s, started his career at Taxi Dining Room in Melbourne as a Demi Chef and went up the career ladder to reach the Sous Chef status. In 2011, Rishi relocated to Sydney with an offer to work as Chef de Partie at Tetsuya’s. It was there that Rishi developed a relentless attention to detail. He later moved to the award-winning Yellow by Brent Savage to serve as a pastry chef, a role that he enjoyed tremendously. Eager for more challenges, Rishi moved to Singapore to head up Maca, which received praises for the artful combination of seasonal produce and their flavours. More recently, a chance meeting with Loh Lik Peng, Founder of Unlisted Collection led to an opportunity for Rishi to call a space his own; Cheek by Jowl which means ‘side-by-side’, a meaningful throwback to be able to work alongside his wife, Manuela Toniolo.
Share
Copyright © 2017 Dilmah Tea Radio. All rights reserved. Website Design, Development & Hosting by eBEYONDS