HIGHLIGHTED Nostalgia OF THE WEEK 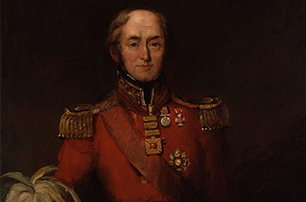 Edward Barnes was a British Army Officer who was the Acting Governor of Ceylon from 1820 to 1821, and the appointed Governor from 1824 to 1831. The success of the island’s planting enterprise is attributed to Barnes who constructed the network of roads linking the hill country to the coast. A vital prerequisite for the industry to develop. Notwithstanding his role as Governor of Ceylon, Barnes took a personal interest in the coffee industry, and it was he who identified the hill districts as being more suitable for coffee growing than the low country areas. Barnes, who had his own coffee plantation, was also responsible for many political decisions that supported and promoted the coffee industry, from tax exemptions, to land grants. Barnes was also the first to initiate development in the virgin forests of Nuwara Eliya, and in 1929, it was established as a health resort and a recuperating station for troops. Barnes, also constructed a Governor’s Residence in Nuwara Eliya, which was named Barne’s Hall. This, today, after significant improvements and expansions over the decades, is now the famous Grand Hotel of Nuwara Eliya.