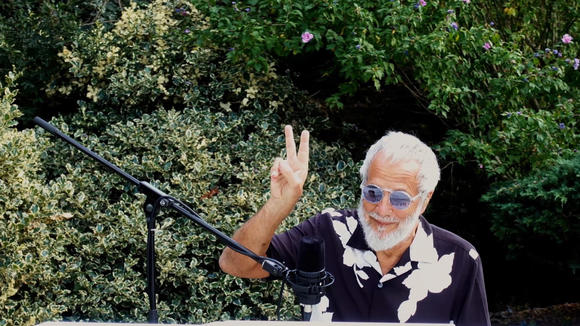 Yusuf / Cat Stevens has corralled a global cast of musicians for a rendition of his 1971 song, “Peace Train,” released Tuesday, September 21st, in honor of the International Day of Peace.

This new version of “Peace Train” features over 25 musicians from 12 countries, their contributions seamlessly combined to create a song that transcends genre or style. Joining Yusuf — who appears at a white piano in Istanbul, Turkey — are artists like Rhiannon Giddens, Keb’ Mo’, Baaba Maal and Pat Simmons (of the Doobie Brothers), and James “Hutch” Hutchinson (bassist for Bonnie Raitt). The clip also features Ghassan Birumi playing the oud in Ramallah, Palestine, Joshua Amjad playing the Kartaal in Karachi, Pakistan, and Tushar Hall playing the harmonium in Delhi, India.

“We are privileged to be able to create a glimpse of unity through music,” Yusuf said in a statement. “However, if you want to make the Peace Train real, then you need two tracks: one track has to be Justice, and the other must be Well-being. Everybody should have access to these two things, then the Peace Train can really get going.”

The “Peace Train” video was made in collaboration with the organization, Playing for Change, and is part of their ongoing “Songs Around the World” video series. Past installments include global renditions of the Band’s “The Weight,” Bob Marley’s “Redemption Song,” and Marvin Gaye’s “What’s Going On?”