HomeSpecial SegmentsMusic NewsThe First Billboard: All That Was 'New, Bright and Interesting On the Boards'

The First Billboard: All That Was 'New, Bright and Interesting On the Boards' 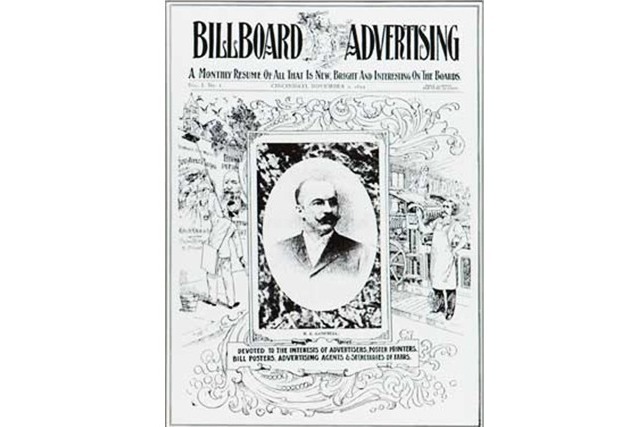 On Nov. 1, 1894, Billboard published its first issue, one that's vastly different from today's magazine (and Billboard's expanded platforms). The premiere issue wasn't even focused on the music industry; Billboard's eventual trademark concentration on music, and, of course, charts, would develop over decades.

Before it became a weekly publication, and a 24/7 presence online, Billboard launched as Billboard Advertising. Its original mission? One that helps explain its name: "A monthly resume of all that is new, bright and interesting on the boards."

Upon its premiere, the eight-page magazine (priced at 10 cents an issue, or, 99 cents per year), was "devoted to the interests of advertisers, poster printers, bill posters, advertising agents & secretaries of fairs."

The magazine's first cover subject was R.C. Campbell, then-president of the Associated Bill Posters' Association. "No more fitting tribute can be paid to Mr. Campbell than to state that he is a man of infinite resource, progressive ideas and tireless industry," Billboard noted in the inaugural issue.

"In selecting his photograph for the first number of this magazine, the Editor was actuated by the fact that he is the acknowledged leader, the first and foremost and most eminent man in the field which we aim to cover."

As 126 years have passed (and Campbell has ceded the cover to, most recently, Jennifer Lopez and Maluma), Billboard's mission to report on and analyze the entertainment business remains on point, although with, for the past seven-plus decades, a more specific focus on the music segment of the industry.

The magazine's first national music chart, the 10-position "National List of Best Selling Retail Records," appeared in the July 27, 1940, issue. Previously, Billboard had highlighted the national "Sheet Music Best Sellers," "Records Most Popular on Music Machines" (compiled from national reports from phonograph operators), and "Songs With the Most Radio Plugs" on a handful of New York radio stations. The "National List of Best Selling Retail Records," however, was the first to poll retailers nationwide on record sales.

Tommy Dorsey crowned the first retail list with "I'll Never Smile Again." The eventual standard, featuring vocals by Frank Sinatra, would total 12 weeks at the summit. The scorecard paved the way for the industry-standard Billboard 200 albums chart (which became a weekly chart on March 24, 1956) and Billboard's present-day menu of Nielsen Music-based niche-format digital song and album rankings and more. The Billboard Hot 100 songs chart premiered Aug. 4, 1958, with Ricky Nelson's "Poor Little Fool" the first of the tally's 1,112 No. 1s and counting.

In more recent years, Billboard's charts menu has expanded to include surveys covering social and streaming activity, with streams added to the Hot 100's weekly tabulation. Billboard has also launched the weekly Billboard Artist 100, expanded touring tallies, weekly surveys ranking songwriters and producers and, as of this September, the new Billboard Global 200 and the Billboard Global Excl. U.S. charts.

"LET ITS GROWTH BE NATURAL"

Meanwhile, Billboard has grown to encompass multiple platforms, including the top-rated Billboard Music Awards, Women in Music, numerous annual industry conferences, podcasts and publications in addition to the weekly magazine and more.

"Although only in its swaddling clothes, [our] success is already absolutely assured," Billboard proclaimed on page four of the maiden issue. "The publishers aim to have it always newsy and to maintain a high and exacting standard of excellence in all articles appertaining to the interest of its readers."

As a "What They Think of Us" feature reflected, "Responses to the very modest prospectus demonstrated that beyond all doubt or peradventure ... surely a journalistic youngster was never started under such auspicious circumstances."

"Start the new paper in a small and inexpensive manner, and let its growth be natural. Do not force it. You will not need to. There is a field for it," advised Col. Burr Robbins.

Added Al. Bryan of Cleveland, "It should have been started long ago."