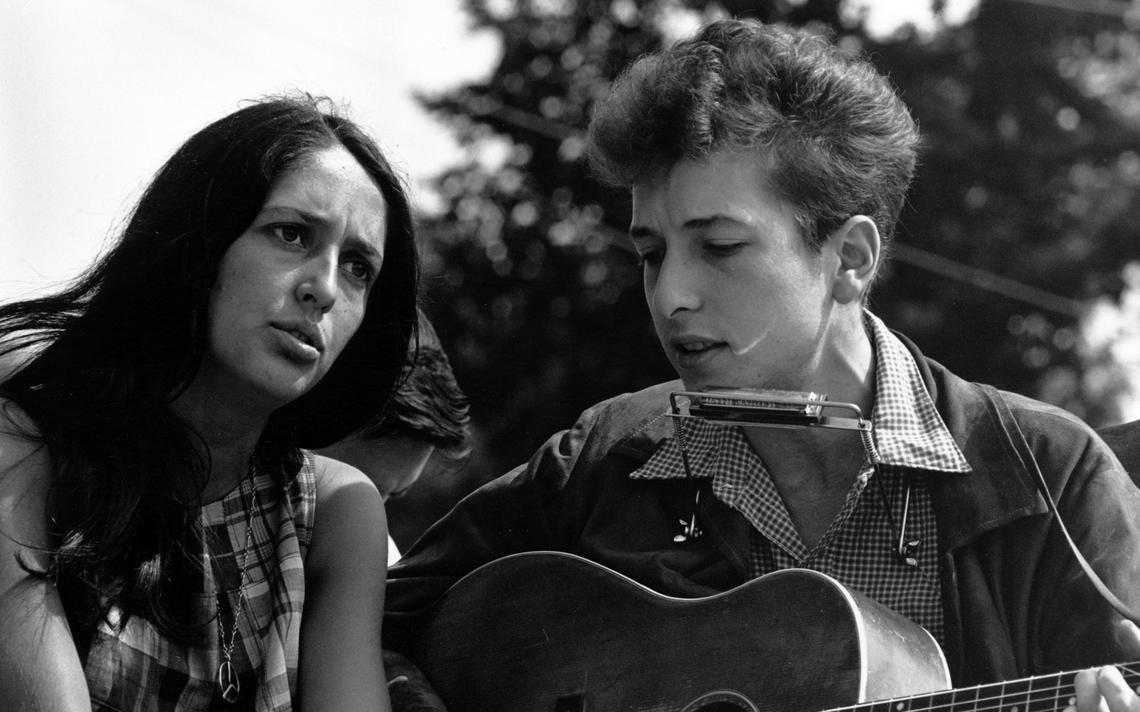 Perhaps no other individual singer-songwriter had a bigger role in transforming the popular musical landscape in one decade than what Bob Dylan did during the 1960s. For this, he is often called “the voice of the ‘60s generation.”

He started the ‘60s singing and composing standard folk songs played on an acoustic guitar. Soon, Dylan’s repertoire of songs included a number of protest songs and then he began to incorporate other genres of music into his folk-based music, including rock, country, the blues and gospel. During the ‘60s, he also switched from acoustic to electric music, which ushered in a new form of popular music, folk-rock. Many musicologists also suggest that his 1965 song, “Subterranean Homesick Blues,” was the “forerunner of rap and hip-hop.”

Most historians and journalists agree that the cultural decade referred to as the 1960s actually began in 1963 with the assassination of President John F. Kennedy and the arrival of the Beatles in the U.S., and ended in the early 1970s with the withdrawal of troops from Vietnam and the resignation of President Richard Nixon.

The musical spokesperson for what was beginning to occur was Bob Dylan, with the release of his third album on Jan. 13, 1964, "The Times They Are a-Changin'." Rarely has a musician been more prophetic in detecting what is starting to take place than what Dylan did at that time.

During the 1960s, the U.S. was facing significant changes in regards to race, politics, social issues and international affairs. Popular music was also undergoing fundamental changes, largely because of the popularity of the Beatles and other British bands. The one American musician who also appeared to be constantly changing during that decade was Dylan.

In the summer of 1959, Dylan began his professional musical career as a rock pianist in Fargo, and in 1960, he switched to folk music while playing in coffeehouses near the University of Minnesota. In May 1960, he dropped out of college and in January 1961, Dylan traveled to New York City where he was able to spend some time with his idol, Woody Guthrie, who was suffering from Huntington’s disease. Dylan claims he was also influenced by African American poets he heard on the streets of New York.

While performing at Gerde’s Folk City in Greenwich Village in 1961, he was hired to play harmonica for a Columbia Records album featuring folk singer Carolyn Hester. John Hammond, the producer of the album, observed Dylan’s potential and signed him to a contract with Columbia.

On March 19, 1962, Columbia released the album "Bob Dylan," and when sales failed to materialize, Hammond was ridiculed for his decision of putting Dylan under contract — but that criticism soon died down when Dylan introduced the song “Blowin’ In The Wind” a couple of weeks later.

In August 1962, Bob officially changed his name to Bob Dylan and signed a contract with Albert Grossman to be his manager. Grossman was also manager for the popular folk artists Peter, Paul and Mary. To help promote him internationally, Grossman arranged for Dylan to take a trip to the United Kingdom from December 1962 to January 1963 where he performed at a number of concerts and appeared in a drama, "Madhouse on Castle Street," on BBC Television.

In May 1963, Dylan released his second album, "The Freewheelin’ Bob Dylan," which included a number of protest songs, including “Blowin’ in the Wind” and “A Hard Rain’s a-Gonna Fall.”

After the release of this album a reviewer wrote, “These were the songs that established Dylan as the voice of his generation, someone who implicitly understood how concerned young Americans felt about nuclear disarmament and the growing Civil Right Movement.” Many folk artists began recording his songs, and one of those artists was Joan Baez, who frequently invited Dylan to perform with her.

Also in May 1963, Dylan was scheduled to appear on television on the popular "Ed Sullivan Show." Before the show, Dylan was notified that he could not sing “Talkin’ John Birch Paranoid Blues” because the song could land the CBS network in a defamation suit. “Rather than comply with censorship, Dylan refused to appear.”

Perhaps the biggest change in Dylan’s style of music occurred in March 1965 with the release of his next album, "Bringing It All Back Home," which featured his first recordings with electric instruments. It included the song “Subterranean Homesick Blues,” which reportedly was the “forerunner of rap and hip-hop.” That album also included “Mr. Tambourine Man,” which became a megahit for both Dylan and the Byrds.

Later that year, he also recorded “Like a Rolling Stone,” which Rolling Stone magazine listed as No. 1 on its "the 500 Greatest Songs of All Time" rankings. This song was featured on his next album, "Highway 61 Revisited." To support the album, Dylan embarked on a hectic tour throughout the U.S. and Canada during the next six months.

After the release of his next album, "Blonde on Blonde," Dylan went on tour of Australia and Europe in April and May 1966. “During his tour, Dylan was described as exhausted and acting as if on a death trip.” He “began taking a lot of amphetamines and who knows what else.” Dylan told a reporter, “I was on the road for almost five years. It wore me down. I was on drugs, a lot of the time just to keep going.”

On July 29, 1966, Dylan crashed his motorcycle near his home in Woodstock, N.Y. The whole incident is still shrouded in mystery, but after the accident, Dylan made very few public appearances, and for almost eight years, stopped going on tours. Dylan later said, “I wanted to get out of the rat-race.”

Many people believe the accident may have actually saved his life. He used this period out of the spotlight to reflect and compose new songs and a number of critics view this period “as a vital step in Dylan’s (further) evolution.”