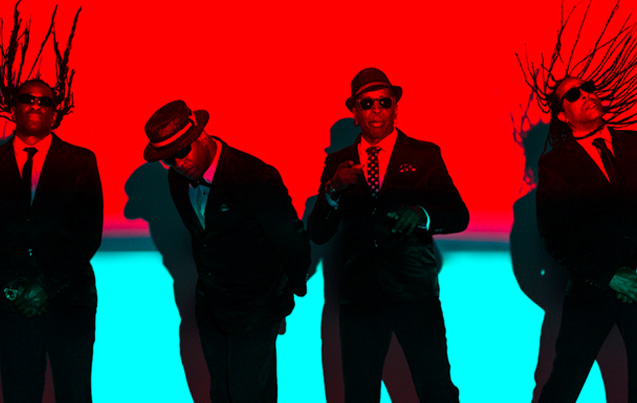 According to founding guitarist Vernon Reid, Living Colour's new album was officially born onstage at the Apollo Theater one night back in early 2012. Reid and his bandmates – vocalist Corey Glover, bassist Doug Wimbish and drummer Will Calhoun – had been invited to take part in a show celebrating the life and legacy of blues giant Robert Johnson, and they responded with a roof-raising performance of "Preachin' Blues," a brooding dark horse in Johnson's famously sparse catalog.

"It wasn't an over-rehearsed thing," Reid recalls. "We just hit it, and right then and there I felt we connected very strongly to a part of that blues flow, in our own way. And just in that spontaneous moment, that's when I thought, 'Man, this feeling, or these stories, or this sense of things is a thread we can work with.' But we didn't set out to do a blues omnibus or a blues travelogue. I mean, we're urban people. But I think the blues is overlooked in its complexity. We see it so much that we don't even see it anymore, because the familiarity breeds a kind of conceptual contempt, you know? You stop hearing 'hellhound on my trail ...,' and what that means. So we really wanted to try to reconnect with the existential aspect of what the blues is talking about."

Shade, a fraught five years in the making and finally out today, is as much a deconstruction of the blues as it is a wide-ranging exploration of the form. The album also serves as a reminder that Living Colour have never been a band to shy away from layers of meaning, especially when the topic is sociopolitical. "Preachin' Blues" captures the chilling portent of the Johnson original, and updates it with a marauding, heavy-rock tread that seems to channel the uneasy malaise of the Trump era, even though the song was tracked when Obama was still in the White House. A similar sense of fear and anxiety permeates their version of the late Notorious B.I.G.'s "Who Shot Ya?" which the band released as a single last year, along with a provocative video that pays tribute to young black victims of police and vigilante shootings, while calling attention, with statistics, to the distinctly American phenomenon of rampant gun violence.

"I would do that song at soundchecks," says Glover, who sings Biggie's rhymes in a razor-sharp staccato, "but I would also talk about it every time somebody in the world got shot by somebody else, whether it was a cop or their best friend or their worst enemy, and how prescient the song was. The only thing that ruins a good time, in his estimation, and in my estimation, is when the guns come out. That was haunting to me – beyond the fact that he got shot and killed in L.A. His imagery about the idea of anyone pulling a gun on somebody else, looking at it from a distance, it's about bravado, but it's not. It's really the fear. It was personal. He knew it from both sides, and I just thought that was brilliant."

For all its charged-up moments – the stun grenade funk of "Come On," the relentless, riff-heavy "Program" (a scathing, and again eerily prescient, indictment of reality TV), the uncorked abandon of "Glass Teeth," or the rock-calibrated take on Marvin Gaye's classic "Inner City Blues" (featuring the rap poetics of Umar Bin Hassan) – Shade flows deliberately, even meditatively, like a concept album. It's testament not only to the guiding hand of producer Andre Betts (known for his work with Madonna, Lenny Kravitz, Joi and more), but also to the band's resiliency as a unit. Nearly every song went through numerous revisions, discussions and debates, which at one time or another tested everyone's commitment. The process stands in stark contrast to Living Colour's early career, when their breakthrough 1988 debut Vivid spurred the rapid succession of Time's Up and Stain before the band went on hiatus in 1995. But it's a way of working that nowadays, with each member past 50 and raising families, works for them.

"The reality of it is, we're brothers," Doug Wimbish asserts. "We've been together such a long time; we know how to make each other smile, and we can easily get under each other's skin, no problem. But we really love each other, no matter what's going on. We keep each other challenged and honest, and that comes out in our music."

Will Calhoun concurs, and then elaborates. "The essence of what keeps us together is our honesty about our existence – as artists, as black men, as fathers, as international citizens," the drummer says. "All those things keep us going. With the incidents that are happening today, we have a responsibility to express ourselves and combat those issues. But I'm not only talking about race and gender. I mean, we're also finding ways to survive and keep our art out there. What's next? I still think, as always, it's up to us."