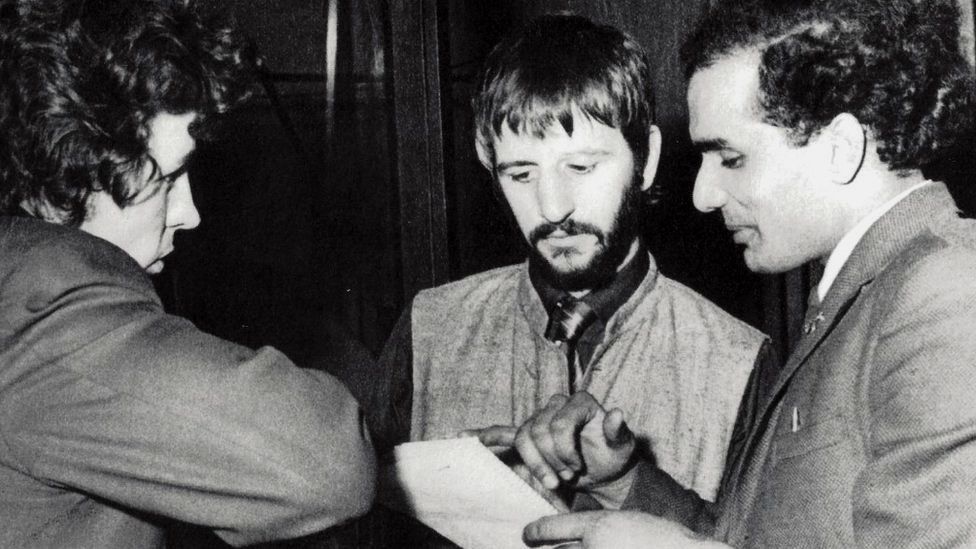 A previously unheard song featuring two of The Beatles at the height of their fame has been given its world premiere after being rediscovered in a loft.

The song, Radhe Shaam, was written and produced by broadcaster Suresh Joshi in 1968 and features Ringo Starr on drums and George Harrison on guitar.

It was unearthed at the 75-year-old's Birmingham home by a friend who was checking on him during lockdown.

The track was played to 100 people at Liverpool Beatles Museum earlier.

Mr Joshi, who was friends with George Harrison, was the one who introduced him to India's celebrated musician Ravi Shankar who was a big influence on the star and famously taught him to play the sitar.

He was working on the music for a documentary film, called East meets West, at the Trident Studios in Soho, London, when Harrison and Beatles bandmate Ringo Starr turned up and offered to play.

The pair were taking a break from recording Hey Jude at the studios at the time.

The track also featured renowned Indian classical musician Aashish Khan but Mr Joshi said they never got round to releasing it.

"Time had gone on, [then] The Beatles were breaking up and had various problems so no-one wanted to [release it]," he said.

However he said the coronavirus lockdown was a "blessing in disguise as we had nothing to do".

He said he had been telling his friend, Deepak Pathak, about his musical past and - as a Beatles fan - he insisted they look for the master tape.

Having unearthed it, Mr Pathak sent it to music producer Suraj Shinh, who restored the tape and mixed the song.

"The song itself revolves around the concept that we are all one, and that the world is our oyster," he said.

"[That is] something that we have all realised during this pandemic."

He said the track was "absolutely amazing", adding that the Beatles' contributions were "unmistakeably" the work of the pair.

"It was quite a moment. It took you somewhere else," he said.

"It was unmistakeably George's guitar [and] it was like almost bringing him back to life.

"It was unmistakeably Ringo's drumming too."

The track was also given its first radio play on BBC Radio Merseyside shortly before 12:30 GMT.

Mr Parry said it would be released on Thursday, with all proceeds going to charity.