Barry Gibb returns to the Bee Gees' music via Nashville 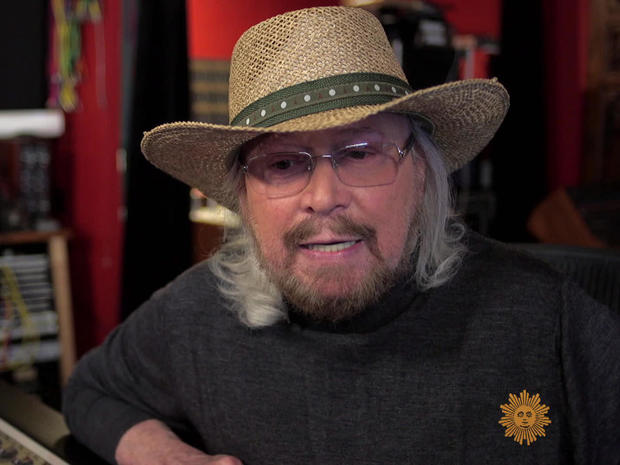 January 4th, 2021
The songs are familiar; the arrangements are new. For his latest album, "Greenfields," Barry Gibb has taken the Bee Gees' catalogue to Music City. "I was bitten by Nashville," he said, "because Nashville is about music. It's about real songs."

The last surviving Gibb Brother reached out to producer Dave Cobb, and said, "This is where I gotta go. This is the kind of music I love." And he teamed up with some of Nashville's biggest stars, including Jason Isabel, Alison Krauss, Brandi Carlile and Keith Urban,

"CBS This Morning" co-host Anthony Mason asked, "How did you choose what songs you were gonna do?"

The album was recorded at the historic RCA Studios in Nashville. "Incredible," Gibb said. "Studio B, which is where Elvis, and Roy Orbison, and the Everly Brothers, and Waylon Jennings, and Willie Nelson [recorded]. A phenomenal experience. Dolly said to me, 'Where I'm standing,' she said, 'is where I sang 'Now I'll Always Love You' and 'Jolene,' in the same afternoon!" So, that's very special, very special to be in that environment."

Born in Britain and raised in Australia, the Gibb Brothers, and Barry especially, were influenced by American country music. He would go on to have several country hits with other artists.

"Yeah, 'Rest Your Love On Me,' which we did the original version, was a #1 record for Conway Twitty, and of course there's 'Islands in the Stream' with Kenny and Dolly," Gibb said.

How did that song come about? "Kenny called me up and said, would I write a couple of songs? And I went to work on that with Maurice and Robin. We came up with the song called 'Islands in the Stream,' which was originally written for Diana Ross."

It's one of sixteen #1 songs that Barry, now 74, co-wrote, mostly with his late brothers, Robin (who died of cancer in 2012) and Maurice (who died of complications following surgery in 2003).

Their extraordinary success is chronicled in the new HBO Max documentary, "The Bee Gees: How Can You Mend a Broken Heart."

Mason said, "The documentary is getting wonderful feedback."

"Yeah, it is staggering," Gibb said. "I don't understand, but then I never have! And I should probably never see it, I think. I've watched bits of it."

"You haven't seen it all the way through?"

"'Cause I can't handle watching the rest of my family. I just can't handle it. It's not – who would?" Gibb replied. "I think it's perfectly normal to not want to see how each brother was lost, you know? And I don't want to address it. I'm past it."

"Was that hard for you to let go of?"

"So basically, I've been in lockdown for years now!" he laughed.

The documentary charts The Bee Gees' early success in the Sixties, and how the brothers, known for their ballads, reinvented themselves in the Seventies, with such songs as "Jive Talkin'." Gibb said, "When 'Jive Talkin'' came out, everybody went, 'Who?' The Bee Gees? 'Broken Heart' Bee Gees? Are you kidding?"

Their soundtrack for "Saturday Night Fever" would spend 24 straight weeks at #1, led by the film's opening anthem, "Stayin' Alive."

"That song seems more relevant now than ever," Mason said.

"I think it touches right on where we are now, you know? Feel the city breakin', everybody's shakin' and we're stayin' alive," Gibb said.

"Was there something specific that inspired 'Stayin' alive'?"

"New York," Gibb replied. "New York was the basic premise for 'Stayin' alive.' It's really John [Travolta] walking down the street in New York. It's that climate and that atmosphere that is so electrifying."

Barry Gibb is keeping The Bee Gees' music alive with his new Nashville album. He is alone now. And four years ago, the last Bee Gee went out on his own for the first time.

"It's lonely up there when you haven't got your brothers. But you still make it fun. That's what counts."

"Does it feel okay even without them?"

"It's bittersweet," Gibb replied. "But, you know, that's one of the things we live with, is loss. And my goodness, I've learned so much from it."