Back at number 1 after 40 years 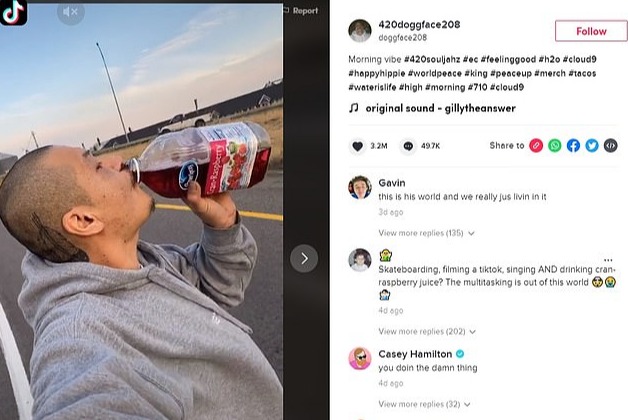 An iconic song by Fleetwood Mac is soaring up the Australian charts thanks to a TikTok video showing a man 'vibin' on a skateboard.

The viral video, uploaded by user @420doggface208 on September 26, shows Nathan Apodaca riding along an empty highway while drinking juice and mouthing the lyrics to Dreams.

The clip has garnered more than 16.2million views on the social media platform, and reshuffled Spotify charts worldwide.

In the week prior to the video's release, Dreams averaged the position of 100 on Australia's Spotify chart.

It even moved from 50 to 32 in New Zealand on the respective dates.

Nathan has since been crowned 'Uncle TikTok', 'Jesus' and 'Vibe King', and said he could not believe the reaction he has had.

'After I did that video, as you guys know the sh*t went viral – holy sheep sh*t,' he said in a follow up video.

'I just want to say thank you from the bottom of my heart from DoggFace, me and my family, to all you guys.

'No words that come to mind ... just overnight sh*t's been crazy,' he continued.

It was also re-shared by Fleetwood Mac on Twitter.

'We love this!' the page's caption read when re-sharing his video.