HomeSpecial SegmentsMusic NewsAvril Lavigne: ‘I moved out of my parents’ house and straight into a tour bus with no rules’

Avril Lavigne: ‘I moved out of my parents’ house and straight into a tour bus with no rules’ 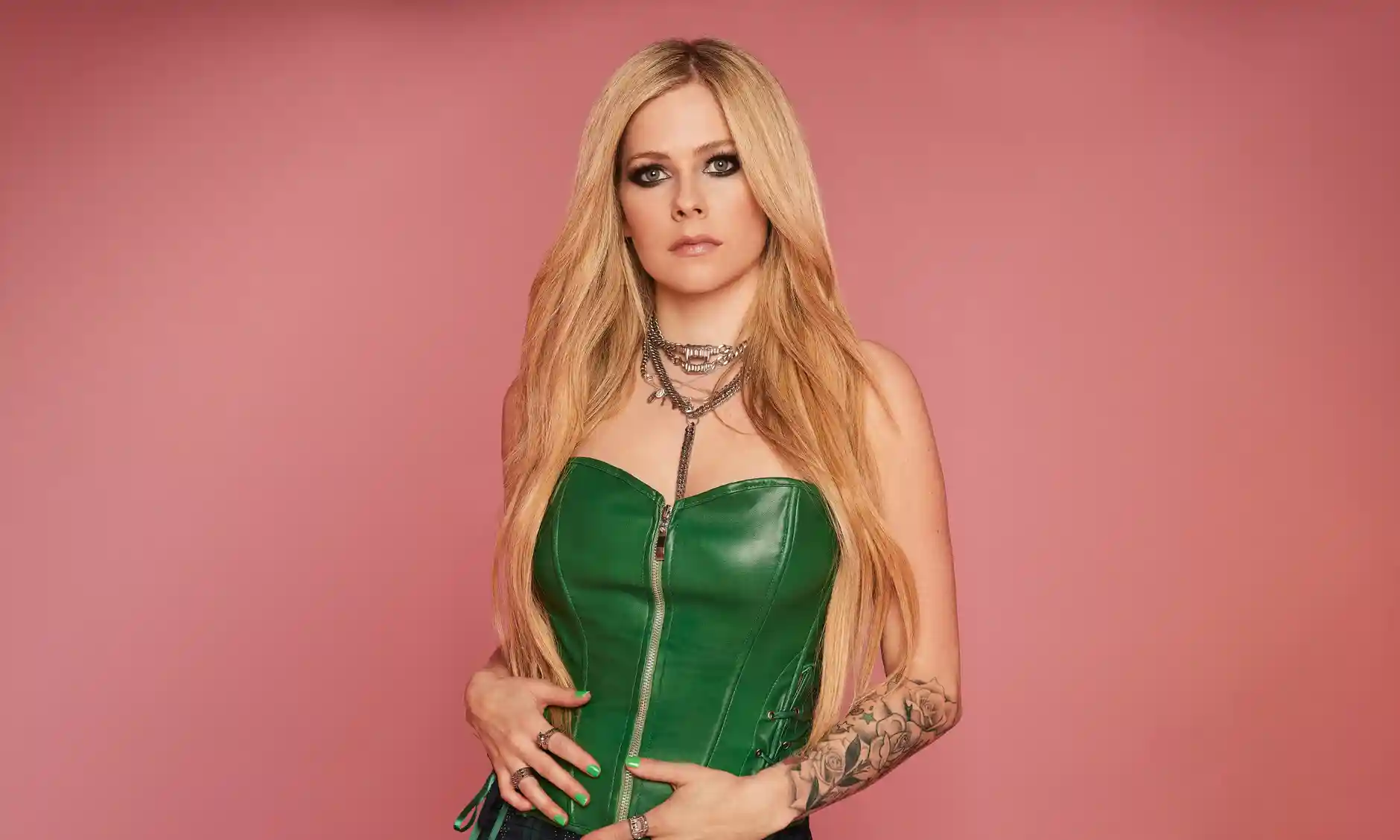 June 1st, 2022
For a generation of girls who spent years exclusively wearing butterfly clips, bright blue eyeshadow and pale pink everything, the release of the “pop-punk princess” Avril Lavigne’s debut album, Let Go, on 4 June 2002 was not merely a new sound, it was enlightenment.

In an era when bubblegum pop and “sexy baby” personas reigned, the 17-year-old Lavigne emerged as its antithesis. Rarely seen without a baggy pair of jeans, heavy kohl eyeliner and a loose tie round her neck, she co-wrote her own songs, with lyrics about skateboarding and getting fired from a chicken shop. Her first two singles, Complicated and Sk8er Boi, both spent half of the year on the Billboard Hot 100 and Let Go remains one of the 20 bestselling albums of the 21st century.

Lavigne’s snarky attitude, grungy look and alternative-inspired sound was a potent combination that elevated Let Go above the rest of the pop pack. Almost overnight, girls all over the world began to swap choker necklaces for men’s neckwear, body glitter for leather bracelets, and denim for cargo pants. Her videos, featuring Lavigne trashing malls and skating with groups of boys, were watched obsessively. Let Go unleashed an army of seven to 15-year-olds brimming with ennui, desperate to remake themselves in Lavigne’s image.

“I was getting out of high school and I just wanted to rock out,” says Lavigne today, speaking from her home in Malibu ahead of the album’s 20th anniversary. “I want loud guitars, I want live drums … I want to write about the crazy stuff, the insane emotions, the good and the bad.”

All of this, Lavigne says, was a genuine reflection of her teenage experience. Born in Ontario, Canada, in 1984, she spent most of her childhood in Napanee, a small town with a population of roughly 5,000, where she wrote poems, learned to play guitar and hung around with the grungy kids. She initially made a name in the country music world, an influence that can be heard in some of the twangy cadences and narrative storytelling on Let Go. She even performed on stage with Shania Twain after winning a radio contest in her early teens, before signing to Arista Records and moving to California at 16.

Even at the time, Lavigne felt acutely aware of her innocence within the music industry. “I didn’t even know what Hollywood was or what record deals were,” she says. The process of finding co-writers and producers who matched her artistic style involved an endless string of uncomfortable meetings in corporate boardrooms; her age coupled with her lack of understanding of the mechanics of production led to a struggle to get her sound across. “They didn’t care what I had to say; they had their own style and didn’t bother to look at me and try to let me lead,” she says.

She eventually settled on a music writing and production trio known as the Matrix, consisting of Lauren Christy, Graham Edwards and Scott Spock. The moment things began to click for the group was when they wrote their first track together, the song that become Lavigne’s breakout hit, Complicated. “I didn’t know what hits were, but my body and my intuition knew that this was a hit song,” she says. “I was like: ‘This is fucking cool, this sounds cool to me.’”

Over the next year, Lavigne and the Matrix would meet in studios and hotel rooms across southern California to build the 13-track album. The themes were heavily influenced by Lavigne’s life, which at the time, she says, mostly involved wearing “fat skate shoes” and finding skateboarders hot. But while many of her songs were fun and frivolous, such as Sk8er Boi, or light and melodic, like Mobile and Anything But Ordinary, darker emotions cut through elsewhere on Losing Grip and the album’s only ballad, I’m With You, which Lavigne says is still a highlight of her live performances.

The combination of these different themes and attitudes made for an album that could be played repeatedly without becoming repetitive. “I wrote this album right when I got out of high school and now I get to hear these lyrics of me talking about my small town and my obsession with skater boys,” she says. “Even things like in My World, I literally talk about the fact that I got fired by a ‘fried chicken ass’ I worked for at a fried chicken chain. It’s hilarious. I look back at those lyrics, and I’m like: ‘I can’t believe I said that in a song.’”

The naivety and simplicity of her lyrics turned out to be a key to her success. Targeting a young audience, Let Go propelled Lavigne beyond two-hit wonder status. But even with the success of the album, she couldn’t quite grasp quite how big it had become. “I remember my manager being like: ‘Do you realise you’re No 1? And still No 1 this week and No 1 this week and then this week?’”

Lavigne’s self-assurance obscured just how young she was when she rose to fame – and that she did so during a time when young celebrities were facing extreme sexualisation and horrifying invasions of privacy. However, Lavigne stood apart from other female pop stars at the time through her “tomboy” look and active criticism of her contemporaries. (In one interview, she mocked Britney Spears for “dressing like a showgirl”.)

Looking back at her treatment in the early 00s, does she wish it had been different? Unusually, Lavigne feels gratitude for being a teenager when Let Go debuted. “I remember being at home and being 14 and thinking like: ‘I need to hurry up and get this music thing going!’” She laughs: “I was like: ‘I want to be doing this while I’m YOUNG!’

“I moved out of my parents’ house and directly into a tour bus, not having any rules,” she adds. “I was like: ‘I can drink beer now and eat pizza every day’ and I just got to hang out with my band and travel the world. It was crazy, but it was pretty special.”

Let Go’s 20th anniversary comes alongside a reappraisal of Y2K culture by a generation too young to remember it. Several of its tracks have gone viral on TikTok, and Lavigne has been cited as an influence by gen Z artists such as Billie Eilish and Olivia Rodrigo (who brought Lavigne on stage at a recent gig for a duet of Complicated). Concurrently, there has also been a rise in emo nostalgia among older music fans. Lavigne is playing a festival in the autumn, Las Vegas’s When We Were Young, that went viral earlier this year for featuring so many popular emo and pop-punk artists of the 00s, including My Chemical Romance, Jimmy Eat World and Paramore.

Lavigne finds the whole experience surreal. “That younger generations are discovering my stuff and that Billie, Olivia, and Willow [Smith] go out into the world and continue to shatter the mould like I did 20 years ago is super-inspiring.” She says even the musicians she is friends with and collaborates with are longtime fans. “All these people around me are like: ‘Oh my God, I’m a huge fan, I listened to you growing up, you inspired me!’ It’s really trippy.”

Her future plans include working with two other superstars: Blink-182’s Travis Barker, whose label, DTA Records, put out Lavigne’s recent album, Love Sux, and Machine Gun Kelly, who features on the album and with whom Lavigne will be going on tour. Major items on her bucket list include a Christmas album, a makeup line and a cookbook. (“My food is, like, gourmet,” she says, “I can do everything! Pasta, sauce, vegan, salads and soups – I can do every kind of soup.”) She has also recently found a director to lead a film adaptation of Sk8er Boi. “I can’t wait to learn this process of making a movie,” she says. “I think I’ll want to make more.”

Twenty years on, Lavigne believes the appeal of Let Go has endured because once people connect to her music “they stay connected”.

“I’ve always had this thing where I’m like: just be as sincere as possible,” she says. “The songs are real and they’re emotional. That works for me.”

Let Go will be rereleased this summer.