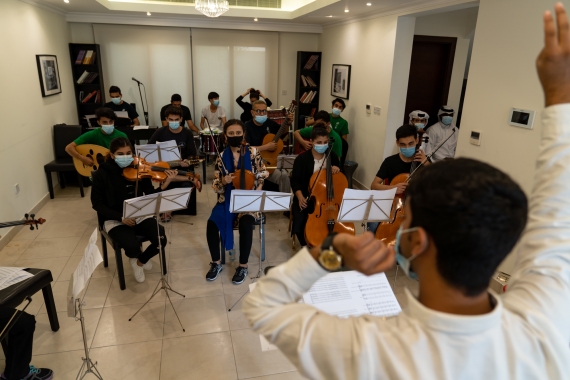 Doha, Qatar – In a cramped room in an evacuee compound, a music conductor without a baton instructs students familiarising themselves with instruments that are not their own. The conductor demands silence from spectators bobbing their heads in and out of the room.

The group has not practised together in nearly three months, not since their school’s doors in Kabul were closed when the Taliban overtook the Afghan government. Although their musical careers back home are in limbo, they have a chance to display their talents once again, and plan to put on a show.

About 96 members of the Afghanistan National Institute of Music, or ANIM, which includes faculty and musicians have fled their homes in Afghanistan.

They landed in Doha and are expected to relocate to Portugal in the coming weeks where they have been granted visas.

ANIM opened its door in 2010 with funding coming from the World Bank and several other NGOs. The school’s mantra includes ensuring the musical rights of all Afghans and promoting gender-equal learning.

Before its doors were shut in August, ANIM had an enrollment of 300 students, with 60 percent from economically disadvantaged families. The school’s doors have been closed since mid-August. The building is now under constant patrol by the Taliban.

Situation on the ground

Since the Taliban’s return to power in Afghanistan there has not been an outright ban on music, but rather restrictions, such as no loud music is to be played in public.

Out of fear of potential consequences, several radio and TV stations in Kabul have ceased the broadcast of music or entertainment they believe might go against the Taliban’s practices and governance, which continue to be moulded and reshaped.

Afghanistan has seen an artistic brain drain since the Taliban takeover. Internationally recognised Afghan artists such as Aryana Sayeed and Sharafat Parwani have left the country, voicing their concerns on social media for the art community still remaining.

Back in the practice room, the ANIM students and faculty are excited to perform in front of an audience again in just two days. The group has previously toured the world playing famous venues in New York and Davos.

Prior to leaving Afghanistan, the students were preparing for a tour in Colombia. Despite the smaller-scaled concert compared with what they have done in the past, the room is full of faces smiling at the opportunity.

But the students’ eyes shift often to the ground in a contemplative manner, thinking about family and friends back home.

“Every door back home is closed now,” says Shogofa, talking about her musical prospects under Taliban rule. Shogofa is a percussion player specialising in the dhol and marimba. She is part of ANIM’s all-female orchestra named Zohra, meaning Venus.

She says when the music school closed all of her musical outlets were put on hold. “I wasn’t able to play music at home, a neighbour had told my family that there were a lot of Taliban [patroling] in the area,” says Shogofa.

Her fellow classmate, violinist Mohammad, says his mother stopped him from going to school the day the Taliban took Kabul. He says the whole moment made him miserable. “I am very unhappy for my future and my dreams I had. Not only myself, but all of my friends were sad,” says Mohammad.

Qambar, a faculty member and conductor, projects a bit more optimism in the room. The ANIM system of education and practice has helped him better specialise in traditional Afghan music while infusing the European notation system, including harmony, composition and arrangement.

This is the second time Ahmed has left Afghanistan. He fled for Iran the first time. Despite the uncertainty in Afghanistan, Ahmed, much like the students and faculty in the room, cannot see themselves without their motherland.

“Afghanistan will always be home for me,” says Ahmed. “I will return again.”

Just a 15 minute drive away from the evacuee compound, the founder and director of ANIM, Ahmad Sarmast sits in his hotel room. Several of his phones are on display. He keeps in constant contact with family and members of the school back in Afghanistan. Approximately 180 members of the ANIM family are still in Kabul. Efforts are under way to get them out.

Sarmast is akin to a walking encyclopedia of knowledge and history when it comes to Afghan music, ranging from Dari, Farsi and Pashto music. His father was a legendary composer and musician in Afghanistan.

During the 1990s, Sarmast fled Afghanistan’s civil war to pursue music education. In 2005 he became the first Afghan to receive a PhD in music studies.

After establishing ANIM in 2010 Sarmast was targeted by the Taliban for his promotion of female’s seeking higher education. In 2014, at an ANIM concert, a suicide bomb attack killed two people and left Sarmast injured and temporarily deaf.

Sarmast is in direct contact with members of the Taliban regarding the ANIM campus. He says there has been slight damage to a few instruments that happened when the Taliban initially took over Kabul and looting was prevalent.

He says the image of his school with empty hallways depresses him.

“Currently, the Afghanistan National Institute of Music is as silent as the entire nation, which is a pity. A society without music is a dead society,” Sarmast says.

Sarmast says one of the campuses at ANIM has been converted to a command centre for members of the Haqqani network, according to night porters of the school relaying information back to him.

He says for now the ANIM campus still stands but he has not received any assurances about its future.

“They [the Taliban] have assured me the school will be safe, but when asked about music education, they say it is a decision to be made by the leadership of the Taliban,” says Sarmast.

As the ANIM students take the stage at the evacuee compound, the group is joined by members of Qatar’s military band to play a three-piece set.

The song that evokes the strongest reaction of the night is called Da Zamong Zonal Watan, which means “Our Lovely Beautiful Land” in Pashto. It is seen as an unofficial national anthem in the country. Several members of the crowd are teary-eyed during the performance.

As the set ends to resounding applause, Sarmast promises to put on several big shows once the students re-establish in Portugal.

Sarmast’s push to preserve Afghan musical heritage and promote its diversity has been his life mission. Despite the uncertainty surrounding ANIM, Sarmast says he and his students will continue the fight.

“They (the students) have had three months of silence,” says Sarmast looking at the crowd and organisers. “Thank you for giving their voices back again.”